The Story of the Kedarnath Temple 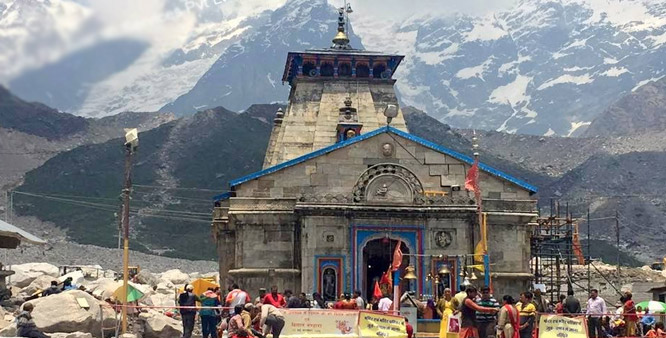 If you recently watched the Kedarnath movie and are curious about the real story of Kedarnath temple, you are not the only one! Almost everyone wanted to check out if the love story of Sushant Singh Rajput, a porter who helped the pilgrims visiting Kedarnath and a Hindu girl who get stuck in the floods was true.

The floods that happened in 2013 were devastating for the place, and it affected several lives in the region. However, the story in Kedarnath is a fiction with a backdrop of the real floods that took place. Let’s check out the details of the Kedarnath Temple, one of the famous temples in India!

The Real Story Of The Kedarnath Temple

Like any other ancient temple, there are many versions and stories about the origins of the famous Kedarnath temple. There is no doubt that this temple which is close to the amazing Mandakini river and beautiful mountains clad with snow has immersed many people into spirituality.

There are two stories associated with the temple. According to the first one, Nara-Narayan, who was a Hindu deity, went on to worship Parvita when Shiva appeared. He wanted Shiva to stay there in order to take care of humanity. So, he decided to stay, and Kedarnath became his permanent home.

Also, read the History of the Kashi Vishwanath Temple

The second story comes from Mahabharata. After the war of Kurukshetra was over, the Pandavas decided to go to Shiva to ask for his forgiveness. But Shiva was very angry, so he left his original place in Kashi and took the form of Nandi in Guptakashi. The Pandavas found him there as well so this time Shiva escaped to reappear in five different areas, and Kedarnath is one of them.

What Geologists Say About Kedarnath?

According to the Geologists, the Kedarnath temple was under snow for at least 400 years. This was during the Ice Age from 1300-1900 AD. They say that the temple not just survived under the snow but easily escaped any possible damages too. The proof of this is the yellow lines on the walls of the temples. These lines show glacial activities. These proofs are given by the scientists who have been researching in this area and work at the Wadia Institute of Himalayan Geology in Dehradun.

According to them, the design and the structure of the temple kept in mind the problems of the terrain and the possible disasters that can occur. This is the reason why the Kedarnath temple has been able to live through the test of time.

One of the worst disasters in the region happened in 2013 when there was a massive flood that swept all through the state of Uttarakhand. It claimed as many as 197 lives and almost 236 people were injured. A total of 4021 people went missing after the flood. Many houses were completely damaged while some were severely damaged and others were partially damaged. The total damaged houses were up to 15,000 in the area.

Despite the severity of the floods, the shrine of Kedarnath survived. According to people, a huge boulder blocked the water from getting in and saved the shrine from completely being washed away. Some appreciate the amazing architecture while others call it a miracle. The temple still attracts many spiritual seekers and is loaded with visitors all the time.

The Location Of Kedarnath

The Kedarnath temple is located in Rudraprayag which in the Himalayas of the Garhwal region. It is 221 km further up from Rishikesh. It is not only a part of the Chaar Dhaam pilgrimage but also is one of the 12 Jyotirlingas around the world. There is no doubt that it is one of the holiest places for Hindus.

Kedarnath movie shows a love story between a Muslim boy and a Hindu girl. They show the mighty foothills of the Garhwal Himalayan range and the region and the calamity that disrupted the lives of so many people who lived in the region. It is an interesting take on the floods with a mix of fiction.

But the significance of this place goes way beyond what it is shown in the movie. It might be a good idea to look up for a documentary on the floods to get a deeper picture of the disaster that was caused due to the floods in that area. Nevertheless, the movie Kedarnath does give a glimpse of the place and its massiveness.

So, are you exploring India and choosing your next destination? Then, Kedarnath can be your next stop! So, when are you booking your tickets to the Kedarnath temple?

List of 25 Places for a Summer Vacation in East India

List of 25 Places for a Summer Vacation in West India

Why We Celebrate Ram Navmi – Story Behind...

Panj Pyare – How was they Selected and...

How Does Golden Temple Manage To Feed Up...

Top 20 Muslims Who Made Indian Proud on...